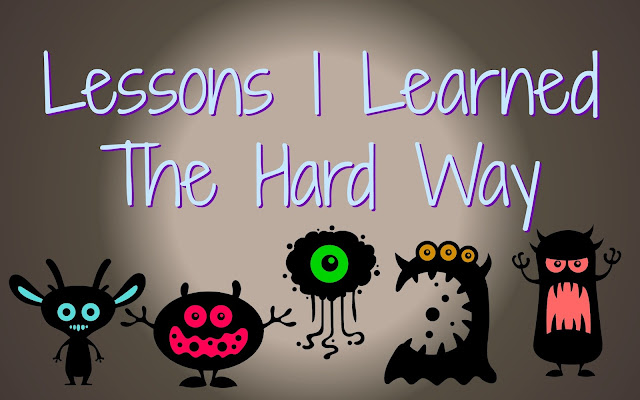 Here is a list of things that you can hopefully relate to or learn from. Otherwise, I don't mind if you laugh at me. These are things I figured out on my own by making mistakes. The best way to learn.


♡ The Camera on my phone will never be good enough after using a DSLR.
I tried spending more for my phone to have a better lens to take around with me and for instagram pics, but it just isn't the same.

♡ Don't cuddle the beautiful fluffy dressing gowns in the store.
Especially when you are wearing lint catching clothes. New dressing gowns need to be washed before you can even go near them, otherwise, you'll end up looking like you're meant to be dressed as a multi coloured cat.

♡ Online subscriptions will keep charging you until you cancel.
I made this mistake with BigFishGames when I was paying a monthly fee for what I think is no reason, and because I don't understand the reasons I didn't even know this was happening until I lost more money than I intended.

♡ Cheek you pockets before turning on the washing machine.
I actually still don't as I don't do my laundry frequently enough. But the problem that happens is the tissues in my pockets (which there will be one of every time) gets entirely mashed up and spread through all the clothes. It's a mess.

♡ Don't put aerosol cans in the fire.
I learned this one when I was cleaning out my room one day and finally decided that the cheap spray I got from the Wearhouse needed to be thrown out, I wasn't using it and it smelled so bad I wouldn't even give it to my little sisters. (They are really not that little anymore). And then my bit was emptied into the boiler. Luckily the door was open when the can went BOOM, or else the walls of the fire may have been seriously damaged.

♡ Don't not breath when blowing embers.
This is another one about fire. Yes, I've said before I'm a bit of a pyromaniac; You need to have oxygen in your lungs as well as on the fire- you can't give all your oxygen to the fire or you will end up fainting into it.
My experience was that I luckily only hit my head on the wall beside the fire when I fainted. I came to with an alarm sound in my ears "OwOwOwOwOwOw..." I realised after a while, I was protesting having hit my head in the fall and the one yelling was me.
Lesson learned: Always keep breathing.

♡ Don't use nail polish as eyeshadow.
My poor poor sister was the victim of this stupidity. I didn't have a hot pink eyeshadow, but I did have a hot pink nail polish. I ignored her when she started complaining of the stinging and I told her to just keep her less-than-1mm-thick eyelids closed. Mum was not impressed with the make over. There were tears and cracked ugly nail polish on her face until Mum got it all off with soap and hot water. She also totally ignored my suggestion of using acetone to remove it.

♡ Bee stings hurt a lot.
I hadn't had a bee sting in years until this last Christmas when I was obviously walking on daisy ridden grass in bare feet. The pain though of a bee sting is crippling. I seriously cannot just describe it to you how painful it was. I would rather get my thirds done than go through that again. My beautiful little sister #2 helped get the sting out for me after I flailed about with an ace going all the way up my leg and actually trying not to be a drama queen. If you're not used to it, bee stings can be pretty traumatic.
Also, another reason to try really hard to avoid it, the itching and soreness last a week afterwards too. Not fun.

♡ When traveling; Pack for the weather.
I always thought It's an old person thing to check the forecast. I'm pretty sceptical about them anyway, but if you're going away somewhere you need to know what you're getting yourself into. It's easy when you are obviously going somewhere cold or tropical but if you're just going up the country you can't use your own region's usual to judge what you will need to wear when you go away. I now will actually check the weather on my phone before I pack.

♡ Presents before December 25 ruins it.
It's sad and annoying if you can't take the gifts from one side of the family with you when you are traveling to spend Christmas with the other; but starting early means that that is your Christmas, then. I know it's not all about the presents and I'd actually rather go to church, but you can't have big expectations for the 25th of December when you have already had Christmas.

♡ NEVER take a digital camera onto the beach.
Another thing I learned recently is that sand does not treat cameras well. If you drop it on the beach then game over. Insurance is not covered by sand getting in the lens, and by golly, it really gets in there. The operation to clean out all those inner nooks and crannies is long and expensive so just don't take your vlogging camera with you to the beach.

♡ Don't leave apples in your handbag.
Cause the result is just gross. Seriously check now if there is fruit left in any go your bags, It might save the beautiful things.

♡ A bad fringe can't be fixed by cutting it more.
That's just it, if you think something is wrong with the way your hair is cut - DON'T CUT IT MORE. It more likely just has to grow out.

♡ If you don't write it down you will not remember it in the morning.
This is one for bloggers, songwriters, and other creation loving people. If you have an idea ever, during the day, late at night, whenever; you have to write it down because otherwise you will learn this lesson that you will not have that genius back. You will just know there was something you wanted to remember but you didn't.

Thanks for your love and support, tell me what lessons you have learned the hard way. I would really love to talk to you.